On this day in 1892, Ambrose and Tootie McGregor bought half of Edison’s Seminole Lodge

Today, most people refer to Seminole Lodge as Thomas Edison’s winter home. But the Lodge actually consists of two mirror-image structures bridged by a central pergola, and on this day in 1892, Ambrose and Tootie McGregor closed of the sale of the western half of Seminole Lodge, which they purchased from Edison’s former photograph company partner Ezra Gilliland.

It was actually Gilliland who recommended that Edison check out the tiny burg of Fort Myers in 1885 when bad weather in Jacksonville threatened to cut the inventor’s trip to Florida short. And Edison built the identical homes, one for him and the other for Gilliland, on the 13-acre site he purchased from Samuel Summerlin on the Caloosahatchee. But three years later, Edison severed all of his connections with Gilliland after Ezra backstabbed him in a business deal.

Gilliland sold his portion of Seminole Lodge to Ambrose McGregor, the Standard Oil executive, and his wife, Tootie, but the McGregors never became Tom and Mina’s right-next-door neighbors. That’s because the Edisons did not return to Fort Myers until 1902. While Fort Myers historian Karl Grismer speculates that an outbreak of yellow fever in Key West in 1887 led to Edison’s 14-year absence from his winter estate, it seems more likely that his rancorous break-up with Gilliland was at the root of his estrangement from the little cow town on the river that he’d fallen in love with in 1885. Besides, he and Mina were busy raising a family and may have found travel with three small children not to their liking. 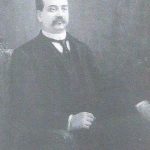 Whatever the explanation, Ambrose McGregor died in 1900 and his widow sold their half of Seminole Lodge to family friend Harvie Heitman in 1902 (who traded it to R. O. Travers in exchange of for the old Manuel Gonzalez home on the corner of Jackson and First Streets (where the Sidney & Berne Davis Art Center stands today). The Edisons then re-acquired the western half of the property and Mina immediately began overseeing renovations to unify the homes. The kitchen and servants’ quarters, along with the dining room, were moved to the former Gilliland home, which was called the “guest home.” Five years later a pergola was built to complete the marriage of the two structures. 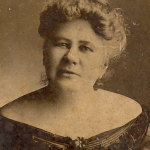 But even though Tootie no longer lived at Seminole Lodge, she would go on to make substantial contributions to the town she’d grown to love, and in recognition of that, Robin Tuthill and Tom Hall have devoted a chapter to her life and accomplishments in their book, Female Pioneers of Fort Myers:  Women Who Made a Difference in the City’s Development (Editorial Rx Press, 2015). You can purchase your copy from Editorial Rx Press, on Amazon or in any of the Edison Ford Winter Estates gift shops, including the Edison Ford Shoppe at Bell Tower.